Multicultural grassroots theater pays homage to Bratislava in their new production, One Day in Bratislava 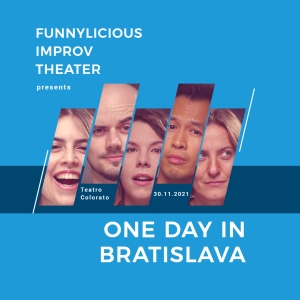 One Day in Bratislava, created by Funnylicious founder and artistic director Hon Chong, is about a cast of diverse characters who live in Bratislava and their interwoven tales of hope, love, desire, dreams, and fears that take place on the same day. What is unique about this performance is that all characters, dialogues, and stories are created spontaneously based on the audience’s suggestions. Every performance is unique, with the audience discovering the stories right alongside the actors.

Inspired by the play ‘La Ronde (Reigen)’ written by Arthur Schnitzler, One Day in Bratislava explores the unpredictable human characters and behavior in different places and situations that often result in awkwardly hilarious, moving, or just absurd outcomes yet strangely true to life. With a multicultural ensemble from Malaysia, Turkey, Croatia, and Slovakia, this one-of-a-kind play fills the cultural gap of theater productions in the English language in the city.

“One Day in Bratislava shows the maturation of our theater group and our attempt at introducing the long-form improv format to the audience in Bratislava. The art of improv theatre is highly under-represented not only in Slovakia but also in most European countries. There are a lot of misunderstandings about this art form. For many people, improvisational theater or improv for short is often seen as nothing more than stand-up comedy and acting games. This is far from the truth because the world of improv covers hundreds of formats, genres, and styles from improvised film-noir to musical to Shakespeare – improv is truly an amazing art form.

We are excited to be able to bring this show on stage in Teatro Colorato. It’s been a difficult period for our theater and also for many local theaters due to the Covid-19 pandemic. This is a crucial period for the local arts scene. A city without its arts and culture scenes is a dead city without a soul.

Above all, One Day in Bratislava pays homage to the city we call home. It’s our love letter to the city. A city that is also maturing, growing and becoming wonderfully diverse over the past decade,” says Chong, the artistic director of Funnylicious.

Ticket prices range from 5€ (online/ advance) to 7€ (at the door). Tickets can be purchased online at goout.net or the door on the day of the performance.

One Day in Bratislava has an approximate run time of 90 minutes and there will be no intermission. The production contains strong language and mature themes that may be considered offensive. A short improv comedy performance from the ensemble will be performed at the beginning of the show.

Funnylicious Improv Theater is a grassroots multicultural theater founded in Bratislava, Slovakia by Hon Chong. Not only is Funnylicious the only English improv theater in Slovakia, but it is also one of the few arts and culture organizations led by a migrant. It aims to elevate the art form of improvisational theater and to make it accessible to everyone. Funnylicious Improv Theater is a non-profit entity and part of the ISAC – International Society for Arts and Culture family founded in Bratislava, Slovakia.